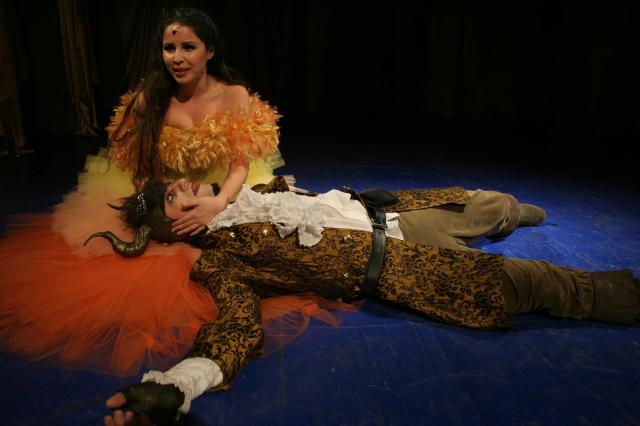 GSTT in Reşiţa
The German State Theatre in Timişoara
travels to REŞIŢA
The German State Theatre in Timişoara will perform in front of the audience in REŞIŢA on Thursday, February 21st 2008, two of its most successful productions: the play for youth Creeps, by Lutz Hübner, and the fairy-tale – musical The Beauty and the Beast, by Simona Vintilă, on Ilie Stepan's music. The performances are scheduled as follows:
Thursday, February 21st 2008
12 p.m., in the hall of the Unions' Culture House:
THE BEAUTY AND THE BEAST
6 p.m., in the hall of the Unions' Culture House:
CREEPS (with simultaneous translation into Romanian via headsets)
The performance of Creeps, staged at GSTT as a national premiere by director Alexander de Montléart, from Germany, is primarily targeted at the young audience, building the action around three girls who are called by a TV studio to be part of the final round of a casting. "Creeps" is essentially about the power of manipulation, the seductive power of the TV screen and the fascination of freedom, and, as far as its author is concerned, Lutz Hübner is one of the most staged German contemporary playwrights. The show is translated into Romanian via headsets.
THE BEAUTY ABD THE BEAST is fairy-tale – musical for an audience of all ages, which amazes with its vitality and colour. The staging represents the dramatic version of the classical fairy-tale, but with the inclusion of modern elements, as well.
Tickets can be purchased one hour before the start of performances. Reservations can be made by phone at 0256-201291, by fax at 0256-201293 or by e-mail at lera@dstt.ro.