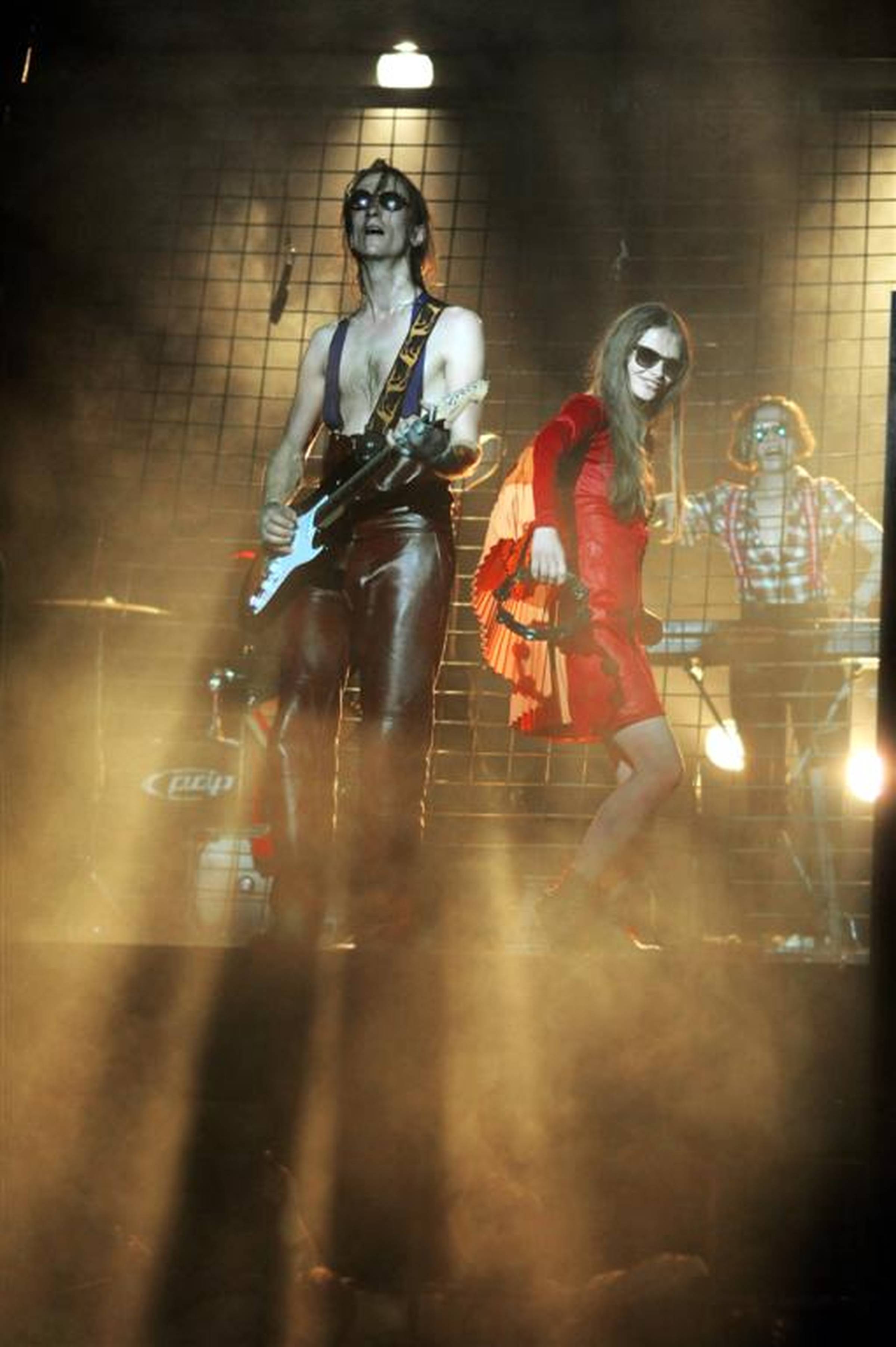 Not recommended for viewers younger than 15 years of age.

With the support of:
Timişoara City Council
Stuttgart Institute for Foreign Relations

King Philip of Spain married to the fiancée of his son Carlos. The latter, overwhelmed by his feelings, gives up his political mission of freeing Flanders, the land occupied by King Philip, and he convinces Posa to arrange him a rendezvous with Elizabeth. But the meeting with the queen will not bring about the desired results. Disappointed, Carlos goes back to politics. Meanwhile, Alba is entrusted with the leadership of troupes in Flanders. Princess Eboli, eaten up with jealousy and rejected by Carlos, weaves a plot against the two. The King learns of the meeting between Carlos and the Queen and orders his son's arrest.

"That is because Hausvater's Don Carlos takes one by surprise with its modernity, its accelerated, frantic pulse, with its combination of elements – from scenography to music, movement, performing – which reveals a true show, structured on multiple semantic levels, maintaining the play's plot, but re-codifying it into a modern grid. The Schillerean conflict is, therefore, devoid of romantic emphasis. [...] The conflict is excellently emphasized by Ilie Stepan's splendid music, with rock rhythms that give the show the atmosphere of a music concert without diluting the dramatic quality. The same idea, perfectly moulded to directorial hermeneutics, is also conveyed by Stela Verebceanu's costumes, either black, casual clothes, the fancy-decrepit costume of the Grand Inquisitor, or the Singer's costume, which turns her into some kind of homeless fortune teller. Not any less important, Mălina Andrei's choreography, which subjects the actors to a true physical tour de force, with ample jumps on the setting's fences and platforms, with some times very sensual, other times very belligerent approaching-distancing, also contributes to the creation of the show's special atmosphere, in which tension is always at its highest peak. Don Carlos has only one tempo, very alert, very steady, somehow compressed, as if under pressure, with almost imperceptible stage changes, with a very carefully designed "walk-on" – the characters are always present on the stage, not only as actors, but also as assistants, thus ensuring the visual dynamics of each scene. [...] Don Carlos is designed as a team performance, in which the participation of each performer is important for the configuration of the tense atmosphere and maintenance of the playing temperature. From this point of view, all actors have proven their commitment, both at the level of the actual dramatic script, as well as at that of physical performance. [...] Don Carlos is a show of dramatic poetry, very Schillerean in its textual fibre, of performing acrobatics, in the dynamic code of contemporary theatre aesthetics, of music, which takes stage semantics towards an area of emotional-intimate perception."

"The attitude adopted by Alexander Hausvater with regard to the classical script (romantic, if you want) is, this time as well, expressively iconoclastic. The director put together his own script comprised of a minimum number of lines thought of as sufficient for the sketching of the plot and the summary of the conflict. Which, in his opinion, is a triple one. First of all, the conflict is both social and political. Philip is a terrible and blood thirsty king, willing to sign quickly and unmercifully countless death and prison sentences, a reason for which the oppressed people place all their hopes in his son, Don Carlos, whose rebellion they are ready to support enthusiastically and in spirit of sacrifice. Second of all, the conflict is also between generations because, as Hausvater declares in the programme, "the young generation of our days wants to be good and not fall out of their parents' standards, it is too tranquil… this needs to change, otherwise there will be no progress". A third conflict appears in the show, maybe the most prominently revealed one: that between two men, king Philip, still young, virile, pleased with his amorous and sexual exploits, self-admiring his body which he shows off each time he gets the opportunity, and his son, Don Carlos, playboy & revolutionary & terrorist & friend & musician. The staging is therefore built on the multiple antagonistic relationships between the two characters, with devotion and commitment, with energy and dramatic spirit brought on stage by actors Georg Peetz and Wolf E. Rahlfs. [...] Don Carlos on the stage of the German State Theatre Timişoara is what is called an impure show. This phrase, however, has no pejorative connotation in this case, but merely underlines the conjunction with the contemporaneity of the staging, our everyday contemporaneity, its particulars being impurity and syncretism." 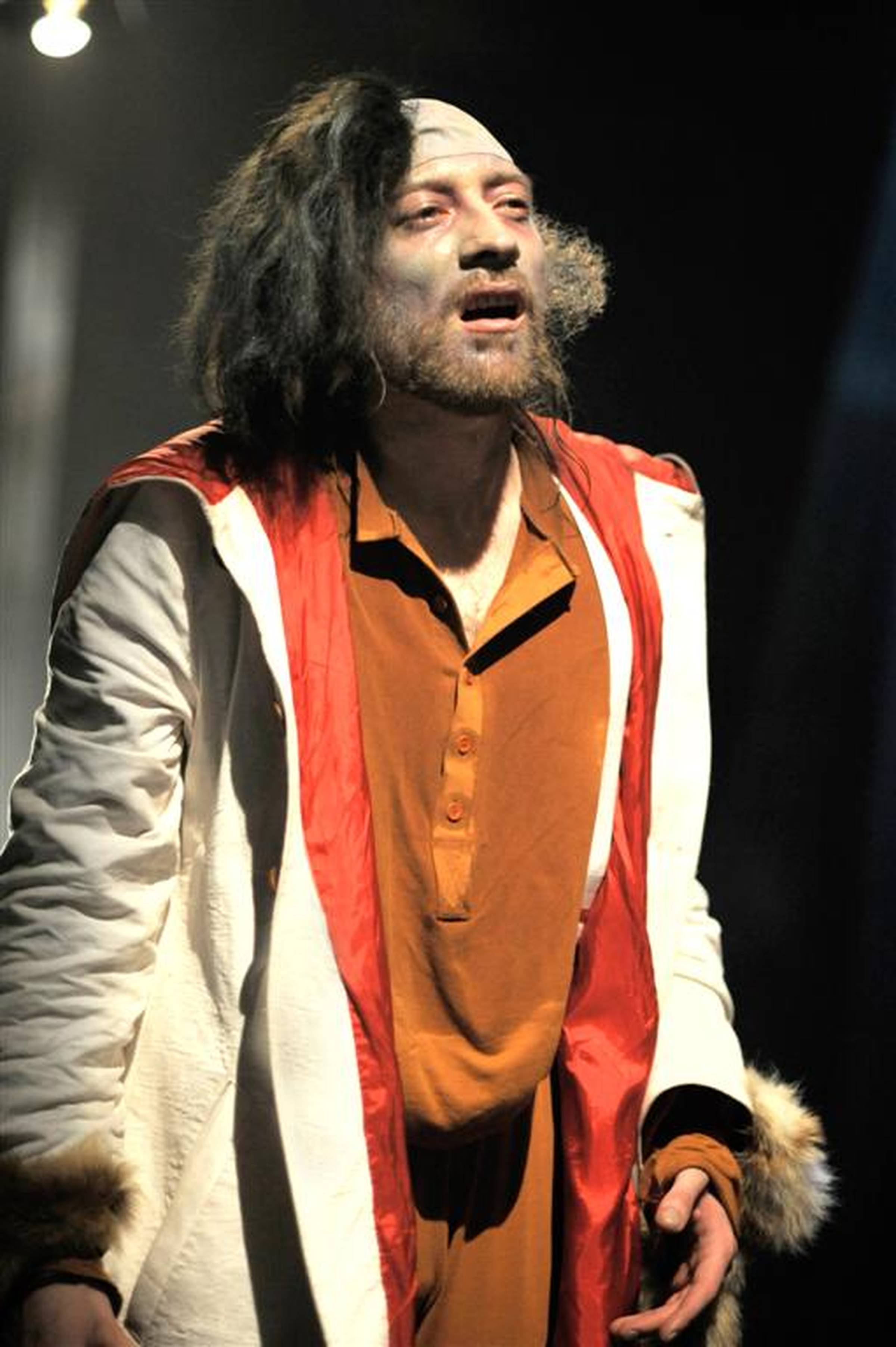 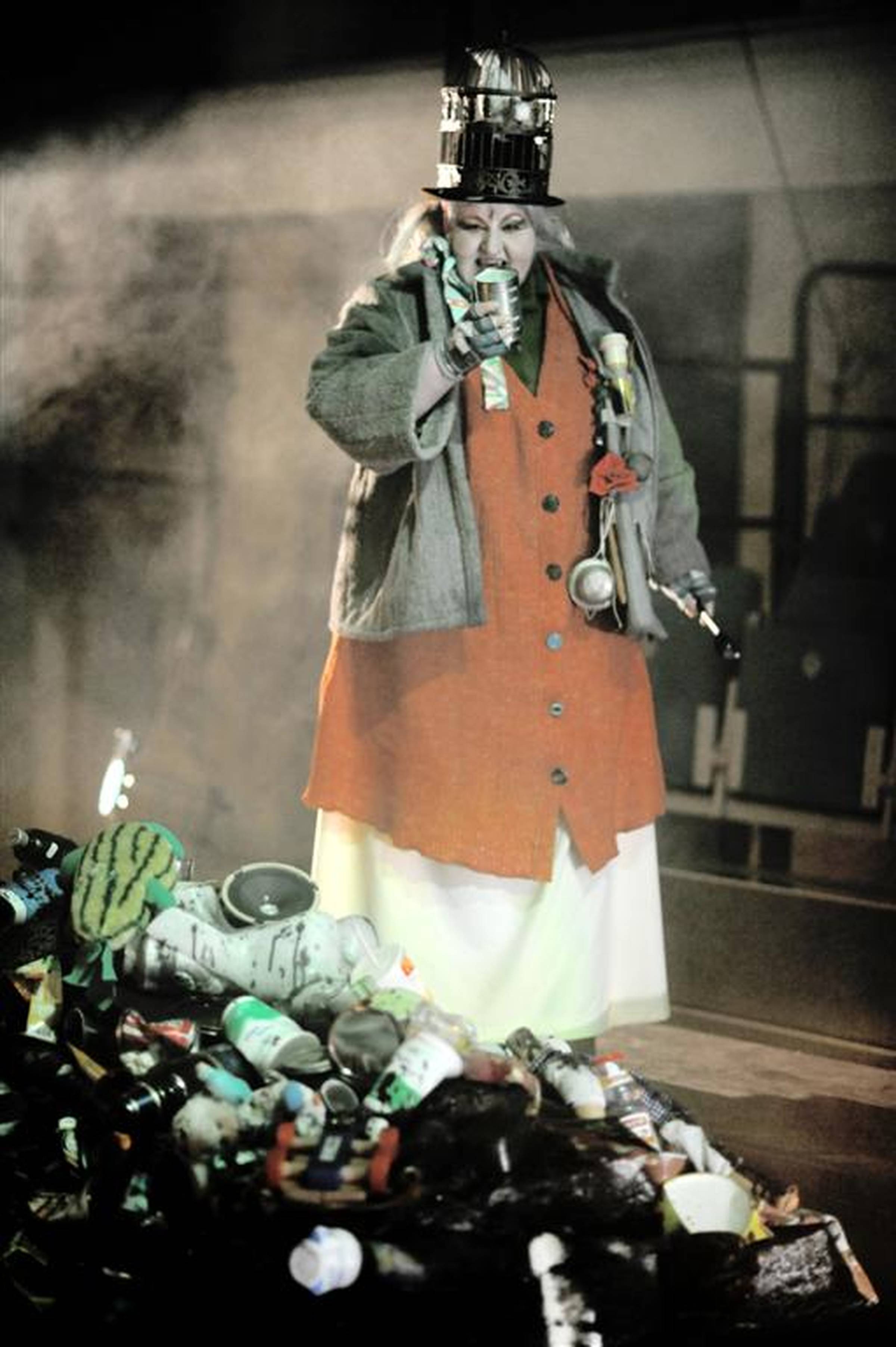 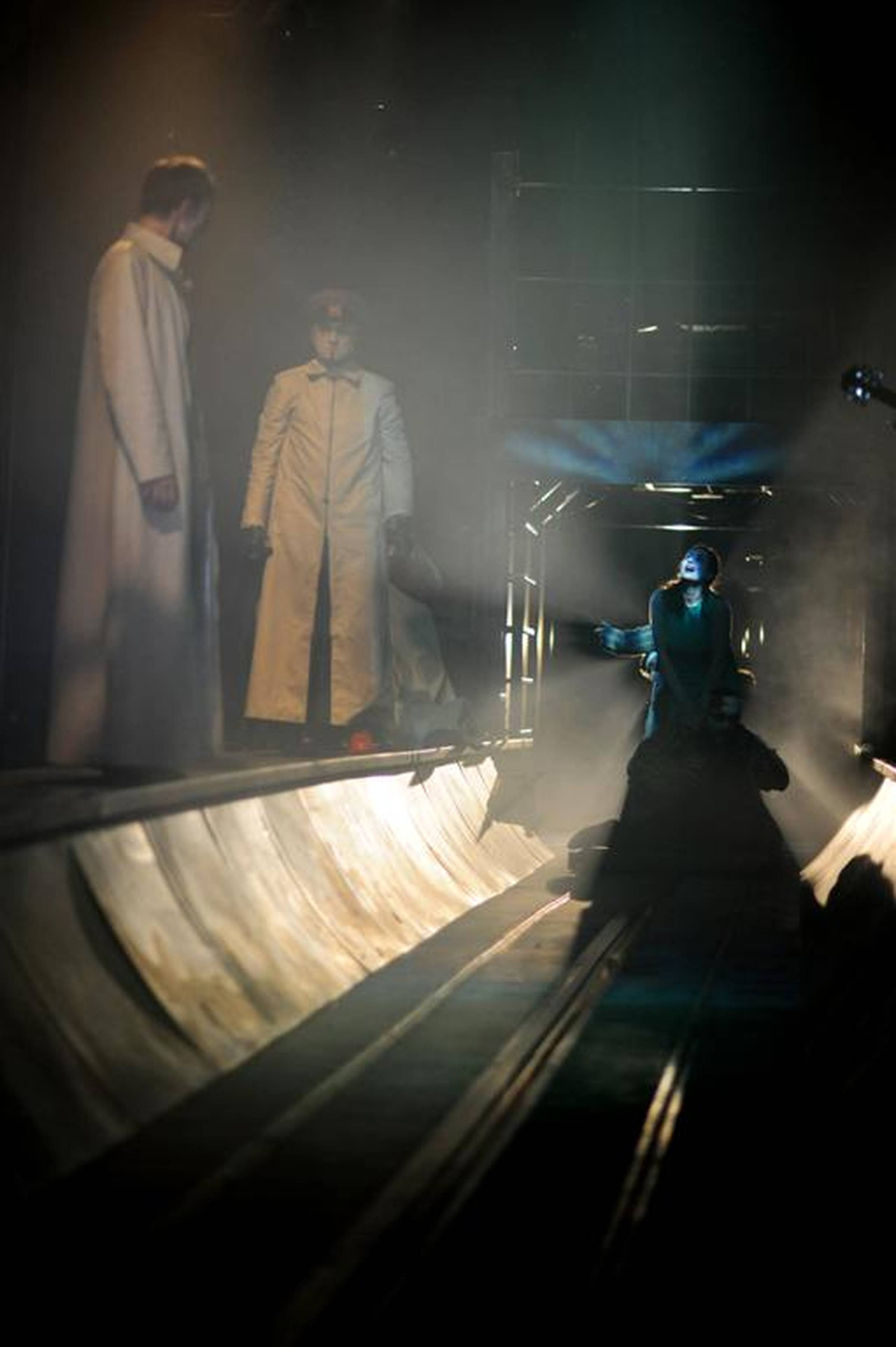 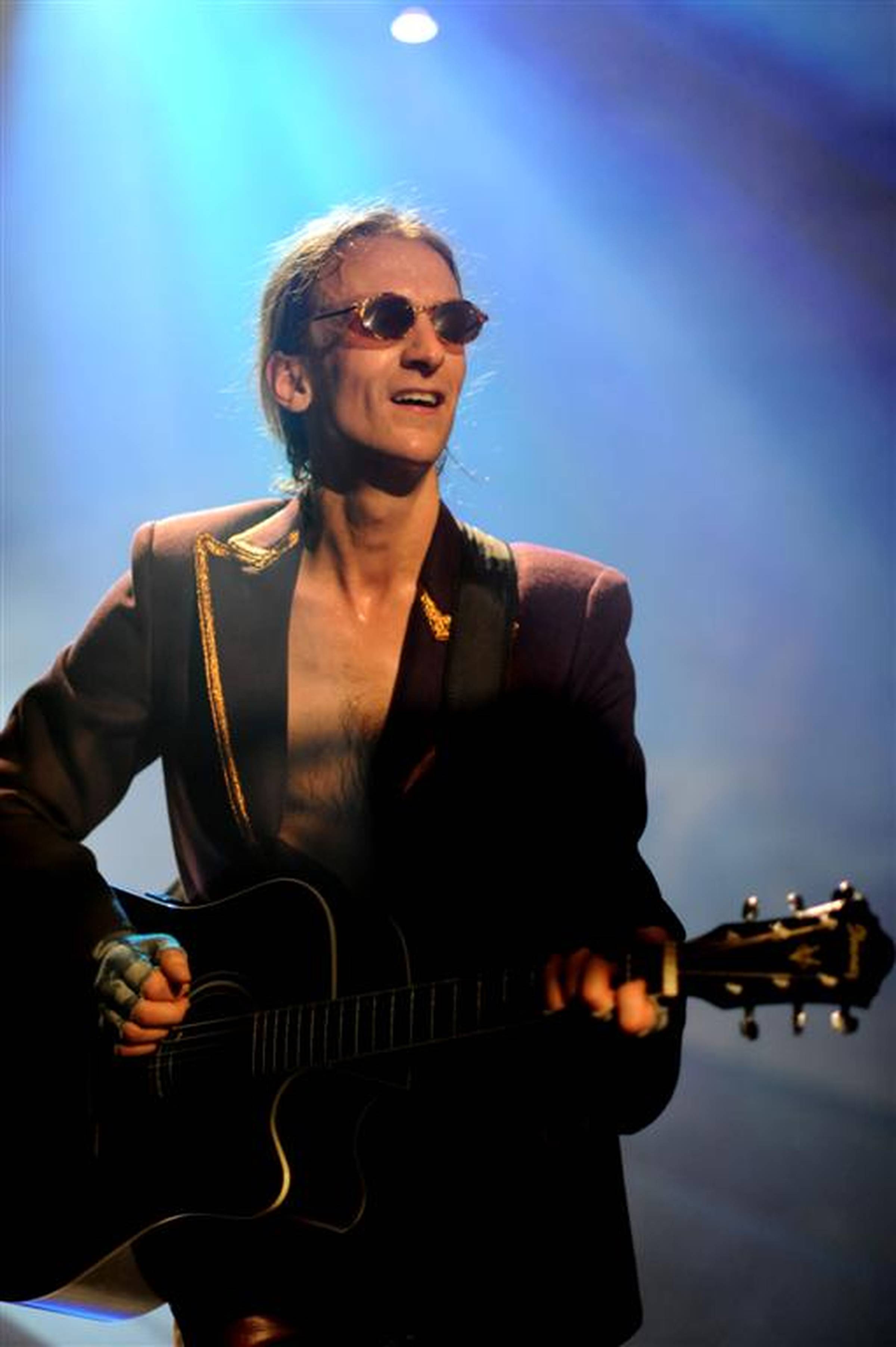 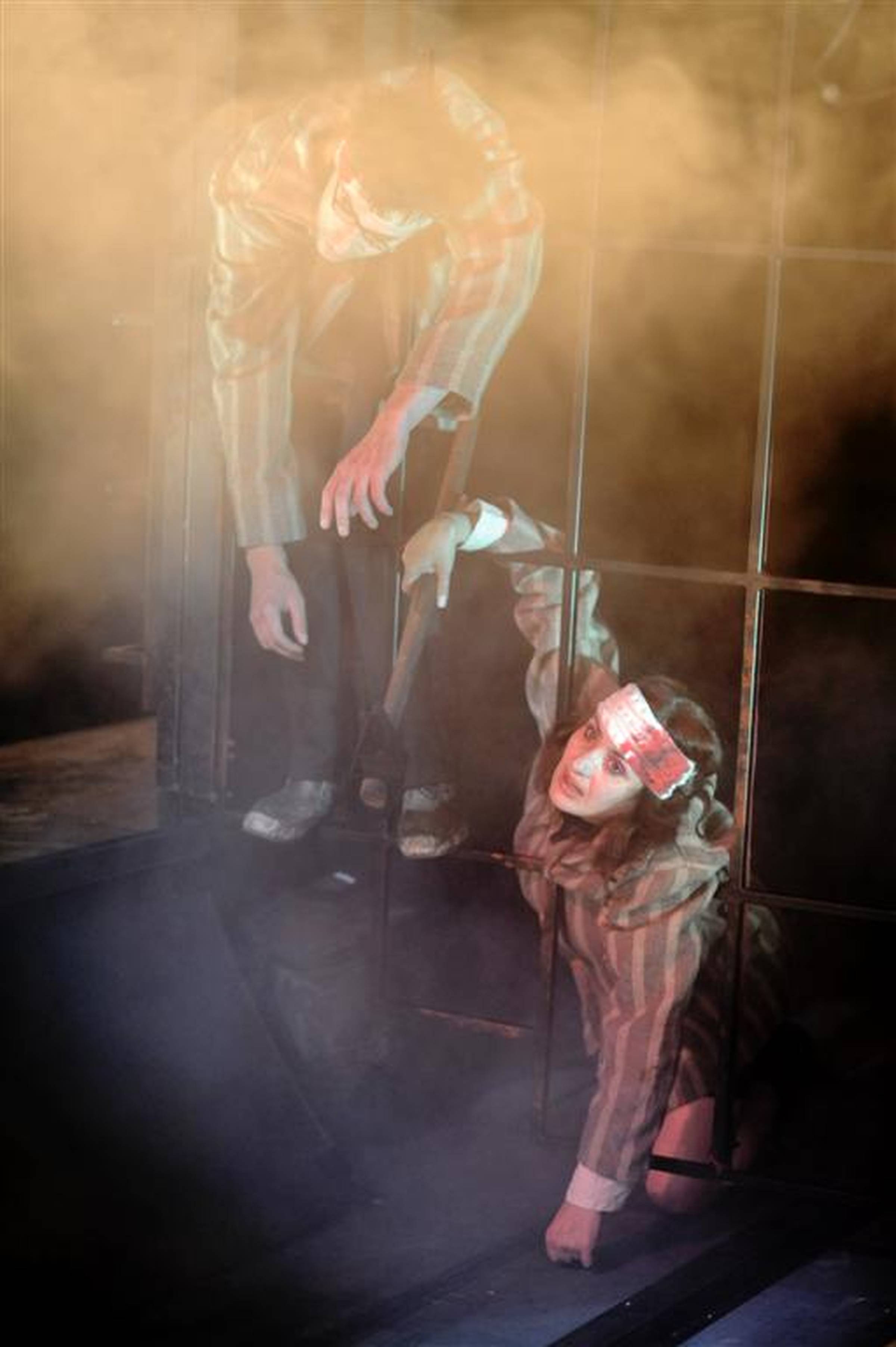 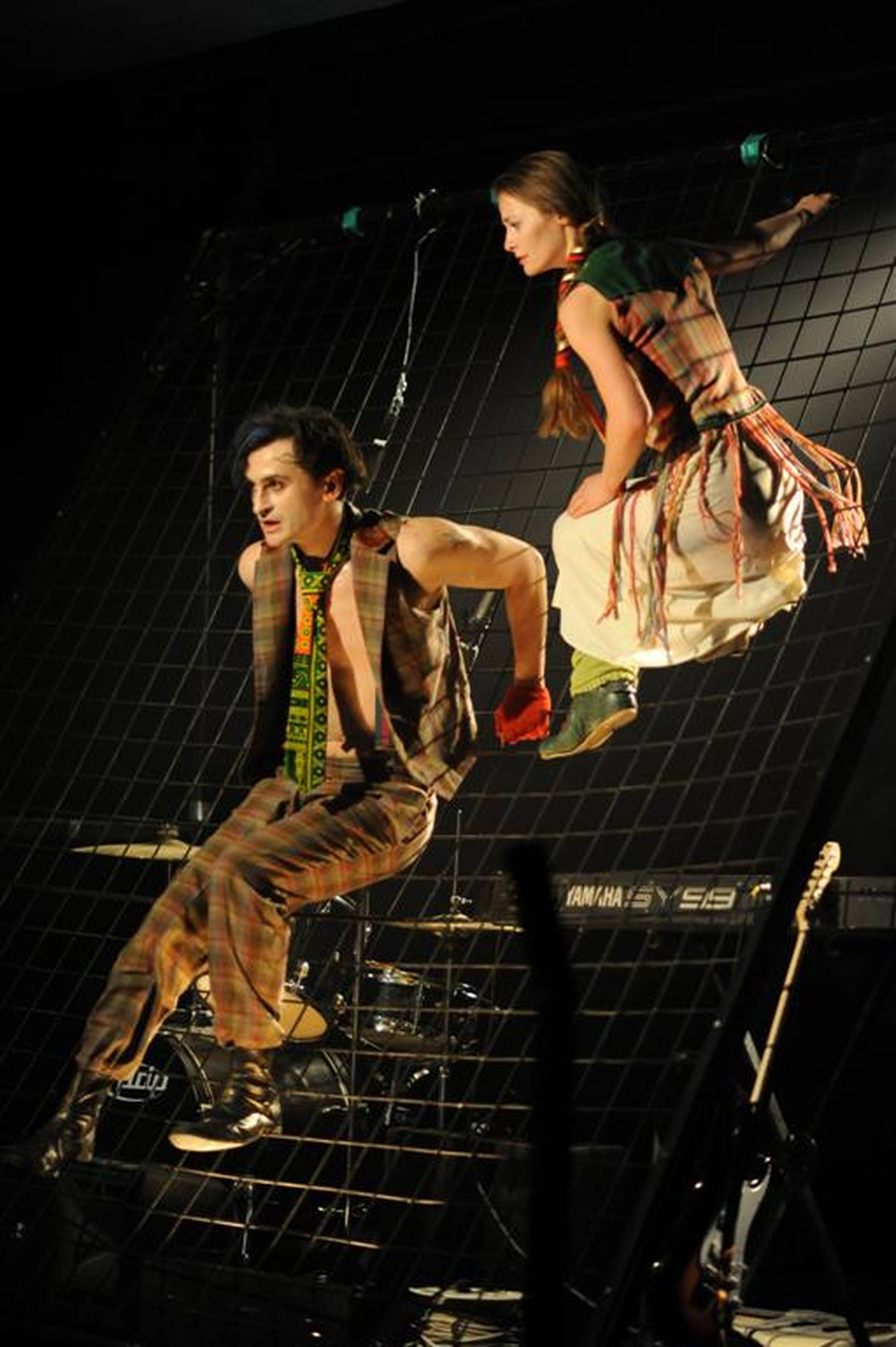